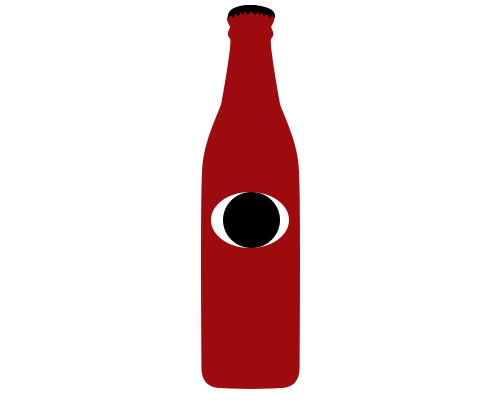 This first product monster was originally a Cheerwine bottle. Cheerwine is a cherry soda made near Davidson, in Salisbury, North Carolina. The bottles themselves are normally a transparent glass, but the liquid inside is a dark red, which led to my color choice. However, in order to make the bottle into a monster I had to remove some of its complexity. I really wanted the cap to open and close like a mouth trying to eat something to the bottle’s left. However, to accomplish that I needed to add another anthropomorphic object. This led me to turn the oval of the Cheerwine logo into the whites of an eye, which ended up turning the bottle into something resembling Mike Wazowski from Monsters Inc.

After adding the eye, having a bottle with depth appeared strange, so I made the shape simpler and more like a two-dimensional shape. I worried that this would reduce the quality of its appearance, but I am actually happy with the way it turned out. From there, all that was left was to animate the shape. I kept with my cap idea, moved the eye back and forth, and had the bottle shake from a pivot point in the middle. This really seemed to give the bottle movement and, I think, made a simple shape turn out very nicely. 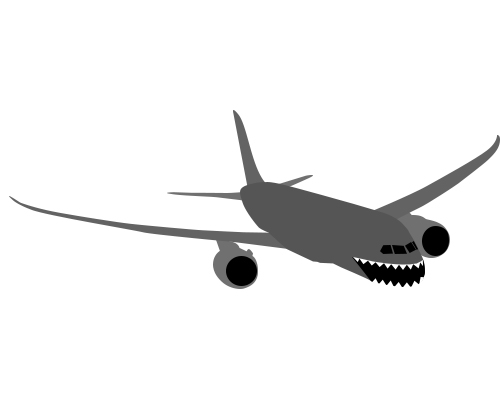 This is a Boeing 787, known as the Dreamliner. An interesting fact about the Dreamliner is that its wings bend far more than the wings of most planes, which provide for much more dramatic photographs. I wanted to capture the spirit of that in my product monster. Creating the shape itself was not extraordinarily difficult. I merely found a suitable picture online and spent a few hours tracing over it, creating different shapes for different parts of the plane, and then organizing those shapes into groups to allow animation to be easier. The more difficult part was making it appear as a monster, but the solution lent itself to me as I noticed that the windows could very easily function as some sort of eyes. Below them I added a mouth with teeth.

Once the initial shape was created I simply had to animate the object. I started with the wings, as that was my original inspiration for the project. Looking at the animation, one can see that the wings move up and down in unison. Next I decided to embrace the appearance of a shark that the teeth I drew implied and had the plane be chomping up and down on something, making it look hungry. Finally I moved the plane up and down, as though it were experiencing turbulence. I did this in very intentional frames, so that the wings move up as the plane moves down, just as would happen in real life. This did unfortunately make it appear as though the wings weren’t moving as much, but the natural feel it gave to the animation made it worth it. 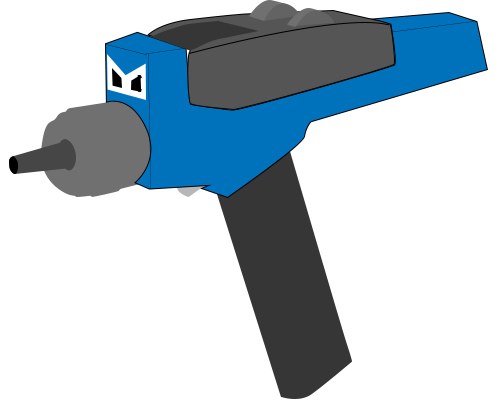 This final product monster is a Type I phaser from Star Trek: The Original Series. These phasers were very simple, and normally colored blue and black, which inspired my color scheme. This object took the longest to trace because it had the most parts, and I needed to add extra lines to imply its three-dimensionality. Once again I ran into the problem of making it appear like a monster, because the actual tracing of the image online was only time-consuming, not difficult. I did not want to take away from the simplicity of the object, so I did not want to significantly modify it. What finally led to my breakthrough was noticing that the grill on the front of the phaser could appear as eyes, especially as monster eyes if curved down like evil eyebrows. This also had the added bonus of being an homage to Spock’s eyebrows in the show, albeit to a stronger degree.

The animation for this object was not hard. Because phasers are the guns of the show, pressing the trigger was really the only thing that needed to be done. From there I shook the object, and then added a few extra movements on various parts to make it seem more chaotic. At first I had the eyes blink in unison, but realized that having them blink separately gave the object a feeling of insanity, which, combined with the fact that it is of a gun, greatly increased its “monster” appeal to me.

Nieves, Melody. “How to Use Color to Set the Mood in Adobe Photoshop.” Design & Illustration Envato Tuts+, 7 Sept. 2016, design.tutsplus.com/tutorials/perfect-different-moods-with-color-in-adobe-photoshop–cms-27074.